Ms Courage Bani had been working as a health assistant for 14 years at Margaret Marquardt Catholic Hospital in Kpando, in the Volta region, little did she know that she was to give birth to  a with Cerebral palsy who will turn her into a professional physiotherapist 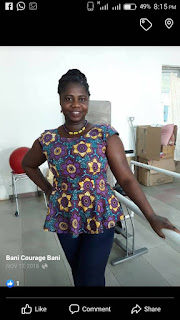 She now works in the hospital as a physiotherapy assistant

Before she got pregnant with her son, she also used to package ground nut paste in plastic bottles for sale in Kpando

Sharing her story with The Special Mothers Project, Ms Bani said “It all started when I got pregnant, I put on a lot of weight and due to that I got tired. I went to see my gynaecologist and told him I needed a Caesarean Session, he agreed but his boss came and said no because it was my first pregnancy, he should allow me to deliver on my own.

The expected date came and they induced the pregnancy from 9: am on Monday to 8:5am the following morning. I was tired and feeling dizzy so I couldn't push, alas when the baby was finally born, he had lacked oxygen.

Ms Bani said “I gave birth to an asphyxia baby or blue baby because he struggled for oxygen for a long time, he came out not breathing. They put the oxygen on him but he did not cry, he was referred to Korle Bu Teaching Hospital.

The baby went into coma before we reach Korle Bu, he was well taken care of until he gained consciousness after 14 days. He was later diagnosed with cerebral palsy.

Ms Bani said we started going to Korle Bu for different clinics, we started physiotherapy when he was three months old, we used to travel from Kpando in the Volta region to Korle-Bu in the Greater Accra Region, and it became my desire to learn physiotherapy, not only to help my son but to help others in similar situations

“In fact my prayer always was that something good should come out from my traveling from Kpando to Korle Bu. One day, I took him to Korle Bu for physiotherapy and it was sister Sandra Asante, the Head of the Physiotherapy department who worked on him.

I asked Sandra, how can I become a physiotherapist, I did visual arts at Secondary School but the degree required General science. She mentioned a private school to me but does not know the location. I used Google and found the location.

I followed up to the Greenhill school of health sciences, I told them I have a child with cerebral palsy so I may not be punctual and regular they accepted on condition that I went through an interviewing session, I passed  both the verbal and written interviews and I gained admission.

While at the Greenhill School of health sciences, I took my son to a nearby regular school, sometimes, the lecturers will use my son for our practical lessons. 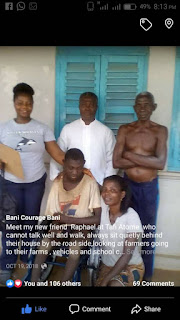 Ms Bani’s son who will be six years in April 2019 started walking without aid last December, she said my son had tendonectomy (A surgical procedure done to lengthen the tendons) done in May 2017 at Dzodze in the Volta region, we did some  rehabilitation at the Orthopedics Training Centre (OTC) in  Nsawam for six weeks.

Courage says, “He knows and understands everything but cannot talk, expressing firm believe that his son he will talk.”

Ms Bani also does the Appropriate Paper based Technology (APT) chairs for free for children with Cerebral palsy, asked how she learnt to make the chairs she said “I bought the chair and the frame from a sister in Accra for my son. I am very creative and an artist by nature, I used my imagination, for now I can only do the corner sit and the chair am now trying my hands on the frame.

“Dr Courage” as she is affectionately called by mothers she attends to in the Kpando municipality, also does extra by finding schools for children with Cerebral palsy within her area. 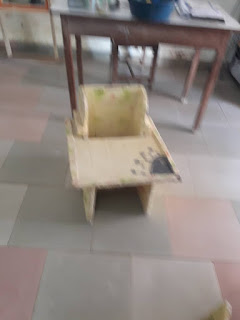 The Special Mothers Project further referred her to an organization that might be of help.

Mrs Hannah Awadzi, Founder and Executive Director of the Special Mothers Project said the Project is working with the theme: Changing the Narrative and stories like that of Courage Bernice Bani need to be shared with the world

She said “Cerebral palsy is not all gloom” there are families out there defying all odds to shine despite the lack of support services and systems.

Mrs Awadzi said the project is looking for partnership and funding to organize workshops for various stakeholder groups to create more awareness on Cerebral palsy issues with the aim of enhancing the lives of families raising children with Cerebral palsy.

You can also share your inspiring story with the Special Mothers Project (www.specialmothers.org) We are working on the theme "Chaning the Narrative" we are looking for funds to get constant airtime on radio to intensify our advocacy and awareness creation campaign on cerebral palsy
You may donate to mobile money 0549114870
Posted by Hannah Awadzi at 1:14 AM