Karmzah, a comic that portrays a person with cerebral palsy as a heroine was launched on Saturday, 6th October to coincide with the celebration of World CP Day worldwide. 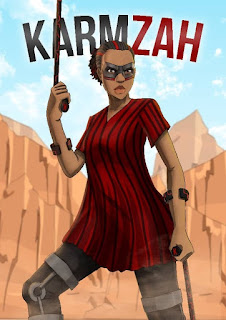 The Comic to be made available online on the Afrocomix App on Google Playstore is expected to change the negative perceptions about persons with disability as feeble, weak or poor.

Ms Farida Bedwei, a person living with cerebral palsy and an IT Entrepreneur who launched Karmzah together with her partners Leti Arts said comic is an attractive way to change perceptions, saying “Children are easily molded and can be influenced quicker thus using comic to attract children and the general public.”

“If a child with cerebral palsy sees Karmzah, the child will grow up feeling proud of him or herself regardless of the walking aid or the wheel chair he or she uses,” Ms Bedwei explained.

She said there is limited representation of children and adults with disabilities in the comics / cartoons. Some characters in Marvel’s X-Men have disabilities, e.g. Professor X is in a wheelchair and Cyclops is visually impaired; then there’s Misty Knight, an amputee with a bionic arm.

“Considering the number of children / adults with varying disabilities worldwide the needs to be a lot more characters they can relate to in the world of animation.”

According to statistics, Cerebral Palsy is the largest cause of childhood disability and there is no superhero/superheroine with cerebral palsy for children to identify with.  Having a superhero (ine) with such a condition would provoke more conversations about neurological conditions and lead to a broader acceptance into society as a whole.

Ms Bedwei said Persons with disabilities are, most often than not, portrayed as helpless victims who need to be rescued/ helped by their able- bodied counterparts. The focus is on their disabilities not their capabilities that perception will only change when we start focusing on their strengths, not their weaknesses.

She said with the introduction of a superheroine who, in spite of having Cerebral Palsy, fights bad guys and does the rescuing, we’ll be changing the narrative and making it seem, at the very least, not that big a deal having a physical disability.

The character – Karmzah, still uses her walking aids, and is empowered through them. If she loses a hold of her crutches, she reverts to her ordinary self and can no longer fight, run or fly as she does with the superpowers.

Ms Bedwei said the idea is to make the aids (wheelchairs, walking aids, hearing aids, etc) ‘cool’. If there are crutches that unleash whips and darts, and braces which allow the wearer to run superfast, it makes it more appealing to the average child/ teen who has to wear/ use them to get around.

Leti Arts creates games and comics based on African history and folklore with the aim of re-telling the African story and culture in a 21st Century reality.

He said Leti Arts creates African superheros and heroine based on local historical figures urging people to patronize Karmzah which promises to be educative and exciting.
Posted by Hannah Awadzi at 7:38 AM