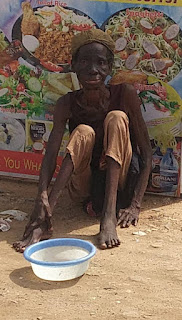 A forty-year-old  partially blind and crippled woman  is appealing to the Government to help her take care of her daughter with down syndrome.
Madam Georgina Yawa Ankrah, amidst tears, said all her family members were dead, her 13-year-old daughter with down syndrome and suspected microcephaly was her only life-line.
Madam Yawa, told the Special Mothers Project that doctors had diagnosed her condition as diabetes but she had no one to help her with health care or daily living, resorting to begging and herbal self-medication.
She has taken to begging by the roadside to support herself, since she cannot trace the father of her daughter.
A teacher at the Dome M/A Primary and Junior High School who pleaded anonymity, said Madam Yawa’s daughter, Jacqueline, who had down syndrome had started menstruation and expressed fears that men could take advantage of the young girl.
The Special Mothers Project, an advocacy and awareness creation programme on cerebral palsy issues, donated 700 cedis to support her upkeep.
Mrs Hannah Awadzi, Executive Director of the Special Mothers Project, asked Government to strengthen the social support systems in Ghana to take care of families raising children with disabilities and other special needs.
Posted by Hannah Awadzi at 9:11 AM