The Speaker of Parliament, Prof.Mike Aaron Ocquaye has said that parliament should be a place of refuge for persons with disabilities and the less priviledged. 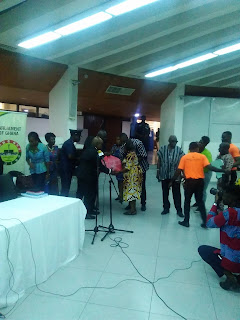 Prof. Ocquaye said this when Parliament hosted the Eugenuis Foundation, an organization that cares for the less priviledged in society.

The Speaker of Parliament hosted the Foundation as his contribution to support them ahead of a concert scheduled for 30th of December for persons with disabilities.

The Concert dubbed “Save a Soul Concert” is on the theme :”Disability is not inability” and will feature groups like the  Star Light Band, a musical group made up of people with visual impairment as well as Minister Isaiah ,  a wheelchair users who leads in worship

Prof. Ocquaye said : “Lets have more of less priviledged persons visit parliament to interact with us” saying “I hope that people will emulate this gesture and even improve upon it.
Members of parliament including the speaker danced and sung along to melodious tunes from the Voices of Democracy choir

The Speaker also donated items, including bags of rice, oil, tin fish, diapers and wipes as well as cash amount to participants as his Christmas gift 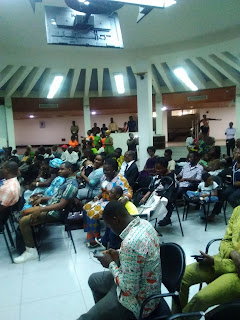 Mr Eugene Danso, Founder of Eugenuis Foundation in his message of appreciation said the group will like to call on the Speaker of Parliament to be an ambassador for persons with disabilities and help in ensuring that their rights were respected.
Posted by Hannah Awadzi at 3:16 AM